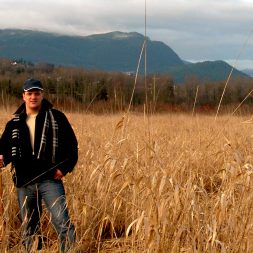 Canadian artist Denis Mayer Jr. has earned international acclaim for his unique style of wildlife painting that offers not only remarkably realistic representations but also images infused with energy, vitality and warmth.

A native of Québec City, Denis knew from childhood that he would be an artist. He initially worked with his father, a commercial sign painter. This training served as a foundation as he privately explored drawing in charcoal, bringing his talent for capturing detail to depictions of both still lifes and built structures. He then worked for many years creating accurate and appealing architectural renderings as well as commercial illustrations for advertising.
A dedicated conservationist and member of the international organization, Artists for Conservation, Denis has contributed to fundraising for organizations that include World Wildlife Federation Canada, Québec Wildlife Federation, and the Art of Nature. His work was selected for the Art Portfolio through Ducks Unlimited in 2007-2009.

Denis lives in Vancouver, British Columbia with his wife and three children and loves to walk the area's woodland trails with his kids. He also listens to both live and recorded music and is passionate about Italian opera which he plays while he is working.

Having achieved success as a master illustrator, Denis looked for and found his greatest challenge and passion - wildlife painting. Inspired by the work of Belgian naturalist and artist Carl Brenders, Denis now works exclusively as a wildlife artist, using mixed media and limited colours that reflect what he sees as the natural palette.