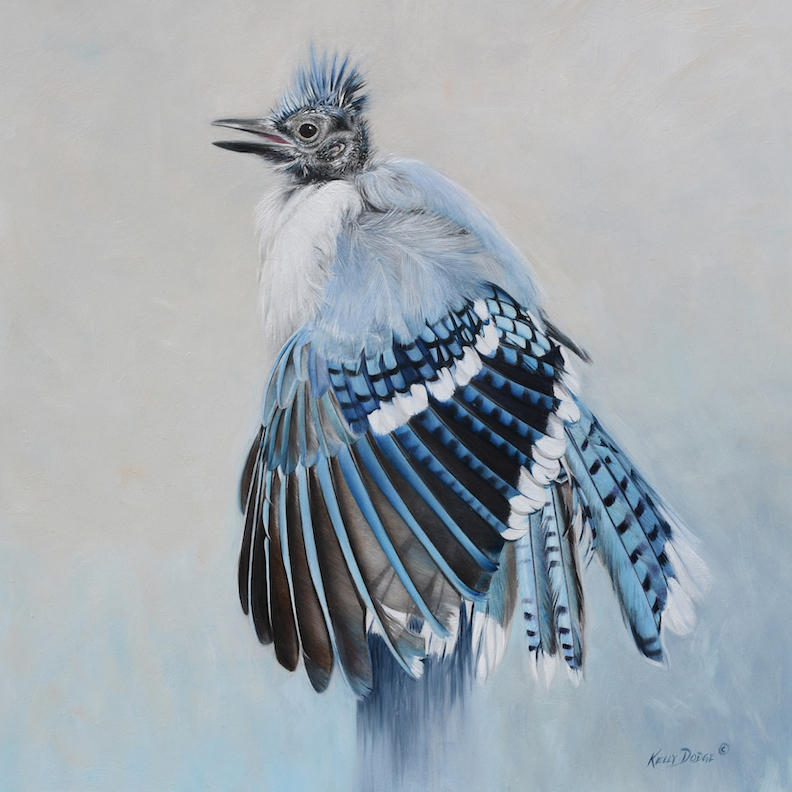 Artist Comments: All birds go through moult, the normal process of replacing old, worn out feathers with new.

How many moult cycles per year varies by species. Typically the wings start with the inner primary feathers and work outward, similarly, the central tail feathers shed first.  Blue Jays have one complete moult per year climaxing with a bald stage in which all capital-tract feathers are dropped simultaneously. This results in individuals being completely bald from the neck up for about a week.  This moult always happens after the nesting season is over so your best chance of spotting a bald blue jay in Algonquin Park is in August. Be forewarned it is a rare sight to behold since bluejays are uncharacteristically modest during this time 🙂

In addition to the naturally occurring moult, sunbathing is used by many birds as part of their routine feather care. As seen here, the bird adopts a posture in which the body feathers are fluffed up and one or both wings are held out from the body with feathers spread and tail fanned. Birds will orient themselves to expose the maximum amount of plumage to the sun.

This painting is of a fledgling blue jay brazenly sunbathing through his first August moult.  You can tell he is a youngster as the lining of his mouth is still red and has not yet turned black.  I always find it humorous that their crest is the first part to start regrowing, giving the jays somewhat of a punk rocker appearance! ~ Kelly Dodge